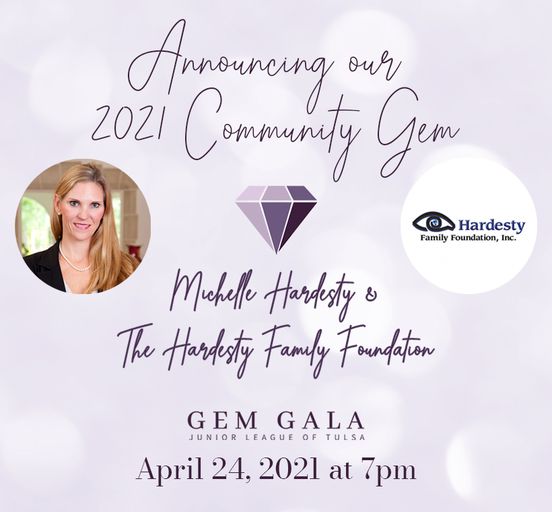 The Junior League of Tulsa is thrilled to celebrate Michelle Hardesty and the Hardesty Family Foundation as our 2021 Gem Gala Honoree and Community Gem. JLT’s Gem Gala is an annual event that recognizes the inspiring contributions of both an organization and an individual in our community. “Gem” stands for “going the extra mile,” and Michelle and the Hardesty Family Foundation exemplify the sentiment to its fullest.

Established in 2005, the Hardesty Family Foundation has sought to build a better future for all who choose to call Oklahoma home. Through investing in our community’s arts and culture, education, health, and human services, they have played an integral role in making Tulsa a place where people want to live, work, and play.

“You can’t look around Tulsa and not see the direct impact that the Hardesty Family has had in the community. Michelle and the Hardesty Family Foundation are true gems who embody the mission and values of JLT, and we couldn’t be happier to celebrate the work they’ve done in Tulsa,” said GEM Gala Co-Chairs Brooke Bedford and Lauren Smith.

Additionally, the Hardesty Family Foundation supports several of JLT’s community partners, such as the Community Food Bank of Eastern Oklahoma, DVIS, Women in Recovery, Street School, Food on the Move, and Resonance Center for Women.  These organizations work to end the cycle-of-poverty and empower women in our community, both tenets of Junior League of Tulsa’s mission.

Please join us in celebrating these treasures of our community on Saturday, April 24. This year’s Gem Gala will be held virtually due to the ongoing pandemic. Tickets and sponsorships are still available for the amethyst-themed event. Online ticket purchases include an access link to the virtual event and silent auction. A three-course dinner with wine and a Gem Vault party box are available for pick up the day of the event. For information on tickets and event sponsorships, please visit https://www.jltulsa.org/gem-gala/ or contact Brooke Bedford and Lauren Smith at gemgala@jltulsa.org.

Proceeds from JLT’s signature annual fundraiser support the League’s mission-based programs and community partnerships that work to end the cycle of poverty affecting women and children in Tulsa (e.g., Food on the Move, Hawthorne Elementary, Resonance Center for Women, and Street School) and train women to become effective community leaders and advocates for social change within our Tulsa communities.

More about Michelle and the Hardesty Family Foundation:

As the Executive Director for The Hardesty Family Foundation, Inc., Michelle is responsible for providing the vision, organization and leadership for their charitable giving.  She is a member and Past President of Funders Roundtable, a regional association of grantmakers.  Michelle planned the first speed-dating program in Tulsa between grantees and funders.  In 2017 she was awarded by the Women in Communications with a Newsmaker’s Award and served on the Saint Francis Painted Pony Committee. She has been on the Leadership Oklahoma program committee since 2018.  Michelle was one of the 2018 Tulsans of the Year and served as an honorary chair for The Center for Individuals with Physical Challenges.  More recently she has served on the Mental Health Association Oklahoma Advisory Council for Vulnerable Populations and Emerging Programs, working on critical community projects such as the Sobering Center, Tulsa Fire Department CARES program, the Community Response Team (CRT) and Special Services Court Docket.  In 2021 Michelle will serve as the Tulsa Community College 50th Anniversary Vision Dinner and Gala Chair.

The Hardesty Family Foundation, Inc. was established in December 2005 by F. Roger Hardesty and his wife Donna J. Hardesty. Roger is the founder and CEO of United States Aviation Co. and The Hardesty Companies, Oklahoma based companies with diversified holdings. Roger and Donna have sacrificed to get where they are today. It is the pioneering spirit which led them to create The Hardesty Family Foundation, Inc. They believe strongly in the American Dream of hard work and tenacity. They like to support projects that share their belief system – if you can dream, you can achieve.