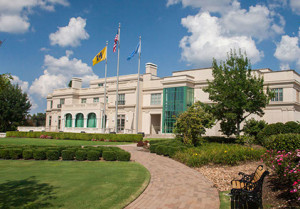 The Gem Gala committee and its co-chairs, Lauren Avery and Rania Nasreddine, have worked tirelessly to create an unforgettable evening under the stars. “This year we would like to start a tradition of honoring our community partners and women or men affiliated with those community partners who exemplify the mission and values of JLT,” Avery says.

This year’s honorees, or gems, include Suzanne Warren and The Children’s Hospital at Saint Francis. “The Children’s Hospital at Saint Francis has been a partner of JLT for a number of years and greatly serves the Tulsa community, impacting the cycle of poverty through their care of children at or below the poverty line,” Avery explains. “Mrs. Warren exemplifies the mission of JLT. She has many years of community service as a volunteer and has worked significantly with Saint Francis.”

Proceeds benefit the Junior League of Tulsa’s community programs, which work to end the cycle of poverty through hands-on education and community-based training.

The evening includes an opening reception featuring libations, a live auction, a dinner, and a much-anticipated after party. During dinner, live auction items, many still in the works, will incorporate green into the packages. For example, one lucky bidder will win a trip to Boston and tickets to Fenway Park, home of the Green Monster. Dallas DJ Michael Jerome will spin tunes throughout the night. The after party offers mouthwatering fare by Lone Wolf—one of Tulsa’s most popular food trucks, which serves Vietnamese and French fusion—as well as an open bar.

The color and stone of choice for this year’s gala is emerald. “The Gem Gala will be a grand and glamorous evening, and so the attire will be black tie with an emerald twist,” says Nasreddine.

While Avery’s focus is presently on this year’s event, she clearly has an eye on the future, with plans for the Gem Gala to grow and, therefore, increase funding of JLT and its projects. “We are going to try to leave a roadmap for future chairs with as many systems as possible. We selected a theme that could be repeated year to year so that our event gains traction in the community. We do want the chairs to reinvent a theme every year. This way, they can just select a new stone,” Avery says.

The Gem Gala may be just a stone’s throw away, but tickets and sponsorships are still available. Tickets are $200 for the entire evening or $75 for the after party. The event benefits JLT’s community programs, which work to end the cycle of poverty in Tulsa.