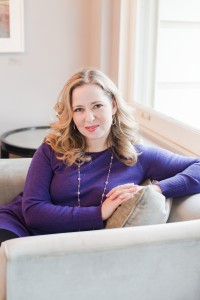 The Junior League of Tulsa (JLT) invites all Tulsans to celebrate the holidays with this year’s Holiday Market Christmas & Croissants guest speaker, Ally Carter. Carter is the New York Times bestselling author of the popular Young Adult (YA) series Gallagher Girls, Heist Society, and the new series Embassy Row. She will be discussing the upcoming release of See How They Run, the second book in the Embassy Row series.

Carter was born and raised in Locust Grove, Oklahoma. Her mother was a teacher and her father a rancher and farmer. She attended Oklahoma State University and Cornell University and worked for several years in the agricultural industry before writing full-time. Her books have been published in more than 20 countries and have appeared on bestseller lists from the New York Times, USA Today, The Wall Street Journal, Barnes and Noble, IndieBound, and Bookscan. They have sold over two million copies in the United States.

We caught up with Carter and asked her about her writing inspirations, future plans, and advice to young writers. Here’s what she had to say.

JLT: You are a farm girl from Oklahoma with an economics degree. Any chance you’d be able to draw on those experiences as a back story for a future character? I mean, no one is going to expect the farmer’s daughter to be a spy, right?

Carter: People are always telling me I should write a farm YA book—after all, few YA authors actually know that world. But I’m probably too close to it. As with most things, you really need a little distance to see things well.

JLT: You’ve mentioned some of your favorite books as a child were The Outsiders, To Kill a Mockingbird, and the Nancy Drew series. Do you think reading books about children and teens who are forced to deal with adult realities influenced your focus on teen characters with unconventional “adult” lives?

Carter: Absolutely! I’m always remembering things that I loved as a teen that now, in some way, is reflected in my work. All of my characters are forced to play in high-stakes games usually reserved for adults. And I love that. I don’t have any interest in writing stories where the characters get to keep the training wheels on.

JLT: What inspired you to switch tracks from agricultural economics to writing? Was it a leap of faith or something more planned out? Did you envision yourself wholly switching to a writing career?

Carter: One thing most people don’t realize is that the vast majority of authors—and, yes, I’m talking about published authors—have day jobs. So there wasn’t any leaping, at least at first. For years, I did my day job during the day and then filled my free time with writing. I was actually at my job when I got the call that I was a New York Times bestseller. So I knew what I was getting into when I quit. It was still something of a risk—giving up a regular salary and excellent benefits always is. But it was a calculated risk that felt like a decent bet at the time. I’m glad I was right.

JLT: Do you find the YA genre gaining more credibility among adults with the success of series such as The Hunger Games? What about as an author in that genre? Have you had any negative experiences with people who dismiss the YA genre as children’s fiction?

Carter: YA is certainly changing. When you consider that, as a genre, it didn’t even really exist 20 or 30 years ago, it’s amazing how far we have come. And that is entirely because of the phenomenon of books like Twilight, Hunger Games, and more recently The Fault in Our Stars. A high tide raises all boats, and these books have ensured that not only will book stores have large YA departments now, but also YA is accepted and respected by large numbers of adult readers. In fact, many studies estimate that most YA fiction is purchased by people over the age of 20.

Now, I don’t find that to necessarily be true for my books—I think the majority of my readers are still teens and tweens. But on the whole there are a whole lot of YA readers who are “teens at heart.”

Does this mean that YA and kids’ lit writers don’t get the, “When are you going to write a real book?” comments? No. But those people don’t know that writing for teens is different than writing for adults for one simple reason: Teens are smarter. They spend their days in class, dissecting great works of literature, thinking critically, trying desperately not to be bored. Recently someone told me that I should really read an adult book everyone was talking about because “it gets really good after page 150.” Do you know any teenager who would sit through 149 bad pages?

JLT: Junior League does a lot of work with children and education. I’m sure you get asked a lot about advice for aspiring young authors; in a similar vein, what can we as women active in education do both to encourage young people to write and to encourage them to read? What do you think the biggest barriers are for reluctant readers and for young writers who eventually abandon their craft?

Carter: Great question. I was a reluctant reader as a kid. This is a dirty little secret among us writers—a lot of us were. I think it’s because the stories in my head were more interesting to me than the stories I found on the page much of the time. (YA as we know it did not exist when I was growing up.)

It wasn’t until I learned that it was okay to put down a book that I realized it could be fun to pick up a book. So that is one lesson. Pleasure reading should be a pleasure. Reluctant readers, for the most part, are just readers who haven’t found a book or genre or format that they love yet. Maybe it’s graphic novels or comics or mysteries or nonfiction. Keep looking. And there is no shame in not liking something—even if everyone else loves it.

As for writers, the key is to remember that no one sits down and writes a perfect book in one go. Most published authors will do at least three—maybe 30!—drafts before they’re happy. And they’re never really happy. … So if you sit down and try to write and it’s hard … well, that’s normal. Keep it up.

Barnes & Noble will have a pop-up shop where attendees can purchase books by Carter, and she will be available for autographs. Additionally, Kendra Scott will hold a jewelry pull that will begin during Christmas and Croissants. For $50, you may select a wrapped package containing a piece of Kendra Scott jewelry valued at a minimum of $60.

Holiday Market will run from November 6-8, 2015, at the Exchange Center at Expo Square, located at 4145 East 21st Street in Tulsa. Members can buy tickets to Holiday Market and to Christmas & Croissants here.